I know that I made the right decision. 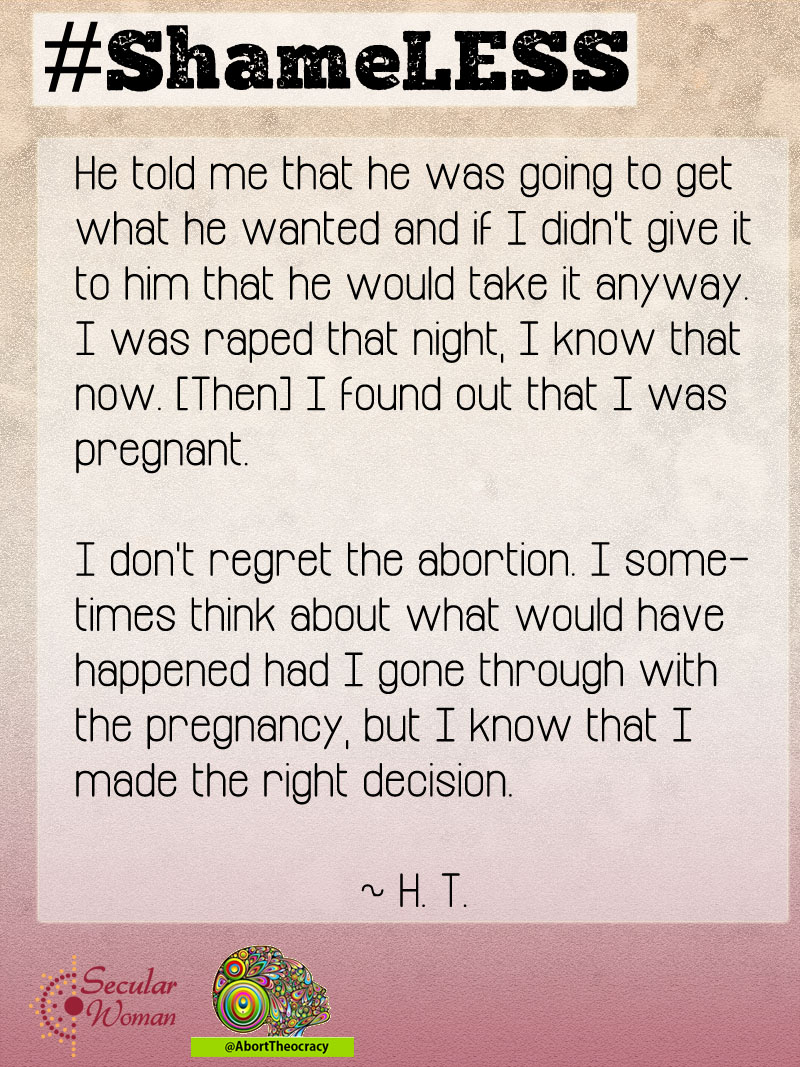 I got married for the first time in the summer of 2000. I had always wanted children, but I knew then it wasn’t feasible.

The day after my wedding, I moved with my new husband to a new city where we both began attending college. I was very homesick, and he wasn’t very supportive. Little by little, he became abusive, first emotionally, eventually physically.

I found out I was pregnant for the first time in the summer of 2003. I was upset, but I decided I wanted to keep the baby. He tried to convince me to abort, but I didn’t want to at the time. He went so far as to leave, and he stayed with friends for a week. I was very upset, but firm in my resolve. The pregnancy ended two months later with an incomplete miscarriage and I ended up having a D&C. Then everything got a LOT worse. The doctors told us that we needed to wait to have sex again for at least six weeks, to allow me to heal, and then we could try again if we wanted.

He didn’t wait that long. He told me that he was going to get what he wanted and if I didn’t give it to him that he would take it anyway and then leave me for someone who wasn’t so fat and hideous to him. I said no, but gave in when it became apparent that he was serious. I was raped that night, I know that now. It continued that way until I found out that I was pregnant again. My husband tried to hang himself when he found out I was pregnant again, not because of what he had done to me, but the fact that I was pregnant again and he did not want a child. I spiraled down into severe depression, drinking and even taking drugs. I decided that I didn’t want to bring a child into the world to be stuck with me, because I believed everything he said to me at that time, that I was worthless, stupid, and that no one would ever want to be around me because I was not worthy of love.

The day of the procedure came. A friend drove us to the city and dropped us off. The procedure wasn’t too bad, but I still remember it. My husband stayed with me. I thought it was to make sure that I was okay. I know now it was because he didn’t trust that I’d go through with the procedure. He didn’t know I wanted it done more than he did. I hated him more and more each day.

We moved back home with our families two years later, him with his family, me with mine. During that time, I started to get up the courage to leave him. Then his grandfather passed away, and I found out I was pregnant again. I left him once our baby was 4 months old.

I don’t regret the abortion. I’m thankful that I got to make the choice. I couldn’t have lived in the situation I was in for much longer, and it would have been that much more difficult with a baby, and if I hadn’t aborted, I wouldn’t have what I have now: a wonderful new husband who loves and supports me in everything, and two beautiful sons, one from my first marriage (and by the way, my ex gave up all parental rights and my new husband adopted my first son), and one from my current marriage. My life is so much better now, and I don’t know what would have happened if I had not terminated my second pregnancy.

I sometimes think about what would have happened had I gone through with the pregnancy, but I know that I made the right decision.