Ten years ago I was in a relationship with a man with whom I’d never want to have children. Good looking, great in bed, but immature and not always reliable. I was seeing him for few months and we always used condoms… but one time one of them broke. I was constantly working around that time and didn’t manage to get a morning after pill in time. I didn’t worry much though. It was the first and only time I had any problems with condoms, it wouldn’t happen, right?

If I had financial resources to keep the pregnancy I would never tell the guy about the positive test and do just that… I didn’t, I couldn’t afford the abortion, but in just a few short months as my immigration status was due to change I could get it on the NHS. The wait was very painful. The closer to the abortion, the less I “wanted” it and the more it became something I was forced to choose. Three months felt like three years.

On the day of the procedure was scheduled I felt very scared. I never wanted anyone to know and had nobody to talk to. I made my way to Marie Stopes clinic for my appointment and once I arrived I felt a bit more calm. Finally I was not the only one who made that choice and not the only one who waited that long.

My last memory of the pregnancy was the calming smile of the surgeon. It was an elderly African man with silver hair and happy face.

When I woke up from the anaesthetic I saw my slightly rounded stomach gone and I felt nothing but a relief. I felt depressed about my abortion before I had it, but I never again cried over it once I had it. I knew I made a good choice then and I have never regretted it since.

Not long after the procedure I met a man who was different from anybody I had ever met. It’s been nine years and now we made a choice to try for a baby. If I was denied my choice all these years ago I would not have the opportunity to make this choice now. It would be one more poor child with one parent and one less happy family. 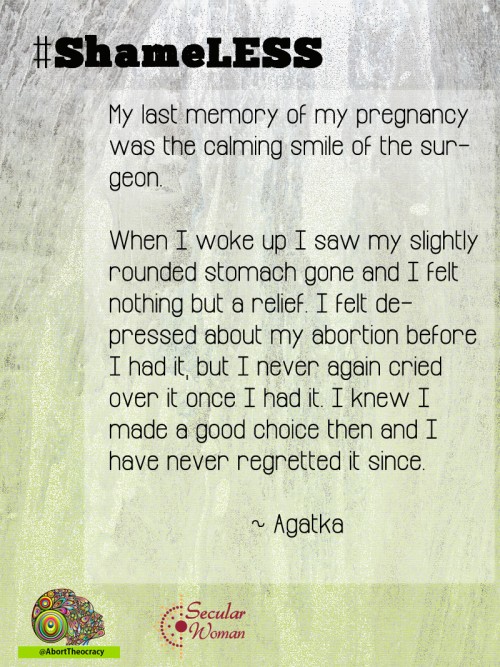 One thought on “A Good Choice”