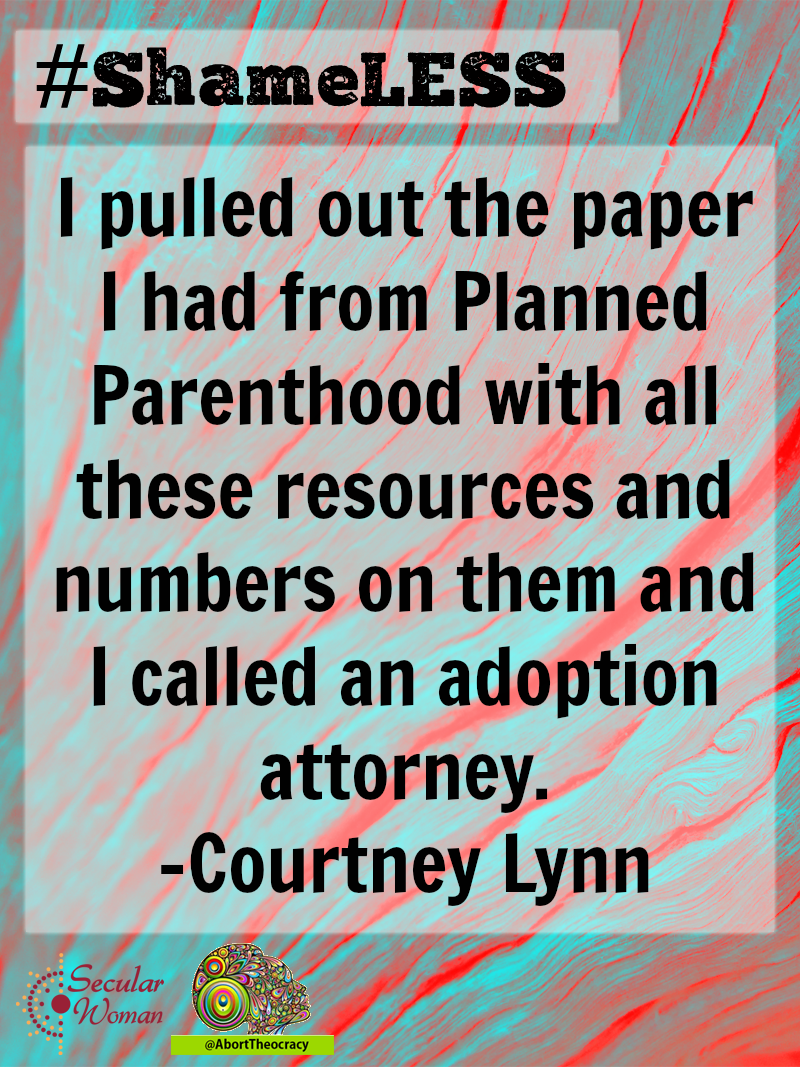 When I was 21 I had a 3 year old child and found out I was pregnant. I always practiced safe sex so it was very shocking to me. I had to consider my options. I knew I could not financially, emotionally, or mentally support another child, so I knew there was no way I could keep the baby. I made a phone call to the local Planned Parenthood and discussed my situation with them. I was expecting them to automatically schedule an appointment for an abortion. To my surprise, they talked to me about my options. Yes, they covered abortion, but they also went over options if I decided to keep the baby such as assistance programs and support groups. They also mentioned adoption and gave me a few numbers if I wanted to consider that option.

I thought long and hard about it and I decided I was going to get an abortion. Since it was early in my pregnancy, I could opt to do the abortion pill which is less invasive. The cost was $765. At the time, I was on government Medicaid and it did not cover any of the cost so I had to come up with the cash. I went to the father of the child to ask for half and had a door slammed in my face; literally. The door hit my nose when it closed and gave me a bloody nose. I wasn’t really shocked, but I was now in quandary. What was I going to do? I couldn’t come up with that kind of money on my own; I had a child to care for and bills to pay. I was just starting school so the job I had at the time only paid minimum wage.

I cried for days. I called the clinic back and told them my predicament and asked if they had pro-bono services for abortion and they told me they did not.  Well, at this point I did not know what to do. I wanted to end the pregnancy, but because I couldn’t financially afford it, it was not even a possibility. I thought about ending it myself so I searched up ways to end a pregnancy. Nothing was really fool proof, so I was stuck. I was saddled with a pregnancy I did not want.

For months I agonized over this problem. Yes, I saw the baby as a problem, not a baby. It may sound cruel, but at the time it was a problem. I did not want my body to go through the changes I knew were about to come and I knew I couldn’t afford this child. I was living with my mom at the time and I knew if she found out I was pregnant she would kick me out of the house. I was stuck in world of problems and it all stemmed from this thing growing inside me.

I hid the pregnancy from everyone because I was ashamed, embarrassed, and afraid. I was already a curvy girl, not too big, but I could hide the baby bump or lie and say I was just gaining weight. I did a pretty good job of it right up to my 9th month. I did not know what I was going to do when it was born. I think I was still in denial myself. I did not even want to admit I was pregnant to myself.

Towards the end of my 9th month I knew I was in trouble. I had to fess up to my mom at last, but I didn’t want to do it without a plan of some kind. I pulled out the paper I had from Planned Parenthood with all these resources and numbers on them and I called an adoption attorney.

The day after I made the phone call I went to the attorney’s office and met with her and a social worker. They showed me several families waiting to adopt. They all had these fancy, hardbound, engraved portfolios of themselves and their desires to have a child. Then, there was one family who had a portfolio that was in a plain cover and printed out on computer paper. She was a school teacher and he was a manager at a large company. I remember looking at their eyes; they were so empty. You could actually see the need in their eyes to have a child. They had been trying to have a child on their own for 11 years and decided to finally adopt. They were strung along by several birth mothers and were about to give up. I chose them.

The social worker called the adoptive mother on the phone while I was in the office and I will never forget the tearful response to her being told she was about to be a mom. I did not say anything, but they had her on speaker phone. We set up to meet the next day and have dinner so we could get to know one another. That was Monday afternoon.

That night I went home and told my mother. It was not a great conversation, but I told her I planned to adopt the baby out to a family and showed her their portfolio. My mom was very accepting and really congratulated me on my choice. We talked for hours about the meeting the next day and how excited I was to bring joy to another family. Well, at least I thought we would be meeting for dinner the next day.

At 3am that night/morning, my water broke. I called the social worker and she in turn called the adoptive parents and told them to meet me at the hospital. When they walked in the door, my mom was there to greet them with hugs. The adoptive mother came up to me with her arms crossed and she looked terrified. I opened my arms and hugged her and told her she was about to be a mom.  Then the adoptive dad came over and about strangled me with his hug! They were so excited.

We talked the whole time and I told them that I wanted them to be in the room when the baby comes out. I think they were shocked. When it was time to deliver, the adoptive dad stayed by my head and the adoptive mom held my leg. She was right there watching the whole thing. She got to see her child being born. After they cleaned up the baby, they handed him to her first. (I did not want to hold him because I wanted him to bond with her and not me.)

It was such a loving experience and I do not regret it one bit. I filled a whole in their hearts and that made me happier than I have ever been. The thing is, without the suggestions from Planned Parenthood, I probably never would have thought about adoption. I do not know what I would have done, but it probably would not have turned out that way.

I am just glad that I was allowed to have a choice. Even though I could not financially afford an abortion, I am glad the option was there. I am also glad that Planned Parenthood was there. They were very supportive and gave me a lot of advice that others would never have done.

I am not ashamed to say I considered abortion and I am even less ashamed that I chose adoption. The point is, there was a choice for me to make. It was my choice and mine alone. No one interjected or forced me to go one way or another. Even though I chose adoption, that choice is not for everyone. I had a different mindset than some other mothers. I chose to think of the family and not myself. Some women can become attached to the child they carry and may not be able to go through with an adoption. Adoption and abortion can be the most difficult decisions for a woman to make. Both have mental and emotional consequences, but it is for the woman to decide which she wants to live with. It is not up to some religious nut or politician. It is up to her.