Choosing to Parent or Not

Choosing to Parent or Not

I had an abortion when I was 23, back in 1996. I was married, and it was even a planned pregnancy, but then I was laid off from my very good job with very good health insurance. I knew I’d have to hide being pregnant in order to find another job, but I also wouldn’t be out of the 90-day probationary period by the time any employer found out, and I could easily be let go. The thought of being pregnant without health insurance (COBRA premiums have never been affordable) was incredibly stressful, as well. So I chose to have an abortion, just under the maximum gestation allowed. It was better than bringing a child into the world to such young parents in such a stressful situation. I was sad about it – but never regretted it.

I had my daughter in ’98, and then my son in ’04. They wouldn’t exist if I hadn’t had the abortion, and I can’t imagine life without them. I’ve been able to do a lot in life that I couldn’t have done by having a baby at 23 years old, and it irritates me to no end when I see something that misleads women into thinking having an abortion will ruin their life. It only will if you let it. My abortion improved my life, plain and simple. 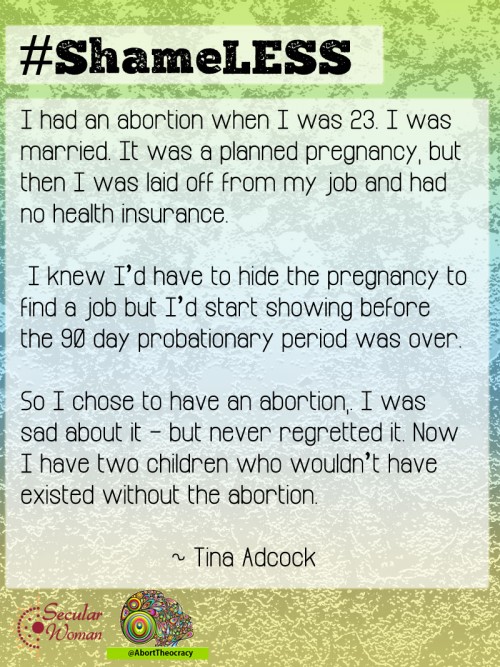